Nyundo na Nyundo is married with twosons. He trained in auto mechanics in Mombassa, Kenya in 1993 after which he moved to Kilimanjaro and then came to Dodoma in 1995. He started the Malle Garage Group in 1996 and the group moved to their present site in 2011. The group is made up of 4 trained auto mechanics, which also have skills in metal work. The group also has six trainees. The group does all sorts of mechanical work, on motorbikes, cars, vans, lorries and also metal fabrication. He found out about the Tools for Self Reliance  project in partnership with SIDO to support existing businesses, and signed up to find out more.

Nyundo learnt about business and entrepreneurship, life skills and improving skilled techniques. Nyundo says that the training was very useful and as a result of this training Malle Garage Group have changed the way they are doing things. For example Nyundo says “we are doing things differently now and this has really improved our business making things easier. We have started to keep records and have improved our workshop as we now have a fire extinguisher and proper safety equipment and clothing, such as overalls and gloves which offer our workers greater protection. This makes them happy”.

In addition to the training the Malle Garage Group also received a large auto mechanics kit which contained over 75 hand tools. Nyundo said, “Now we have the right tools, and plenty of tools, our working moral has improved. Jobs that use to take us two days can now be done in less than one day. This means that our production and income has also increased. The income gets distributed between the groups workers and the group is also now making some savings.” 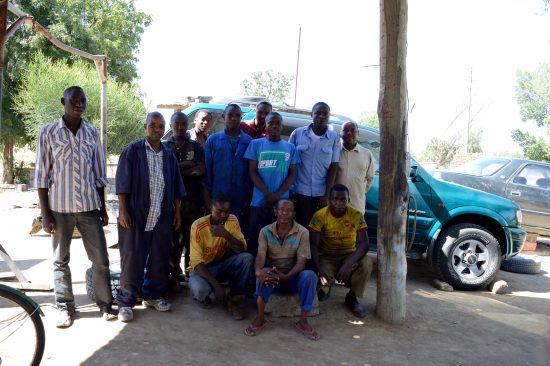