Marietha Amsi is 30 years old and has 2 children. She lives with her family in a rural area of Manyara in a village called Qaloda. In 2010 Marietha learned tailoring though it wasn’t until 2012 that she could start using her skill regularly as she had no machine to work on. 2012 was when she and 4 other women from her village formed a tailoring group called ‘Umoja Tailoring’. Together the women pooled their resources and were able to buy a couple of machines so that they could work.

Marietha is the secretary of the group and took part in Tools for Self Relaince / SIDO training for existing businesses, in Babati, Manyara. During the training Marietha was taught Technical training; business and life skills where she learnt about record keeping, calculating profit and loss, business planning, and HIV/AIDS awarenes and keeping healthy. Marietha says “the training was really useful I was taught so many new things that I did not know about. After the training I came back to the group and we spent one day each week where I would tell and discuss with my other group members what I had learnt. Since the training we have improved the way we are doing things, such keeping records which we never did before”.

After the training the Umoja Tailoring group also received three sewing machines. The additional sewing machines have been a real help to the group too – their production and income have both increased. With this increase Marietha says “we have been able to save and have had a shelter constructed. We used to work in the open but we now have somewhere secure and safe”. The Umoja Tailoring group   are already planning for the future and hope to keep growing and expanding. Marietha says “we are hungry to learn and to keep expaning our knowledge and skills. We also want to continue saving and to buy an overlocking machine and to empower youth from our village so they too can become self-reliant”.

Thank you for the tools and training support. It has given us a life chance. 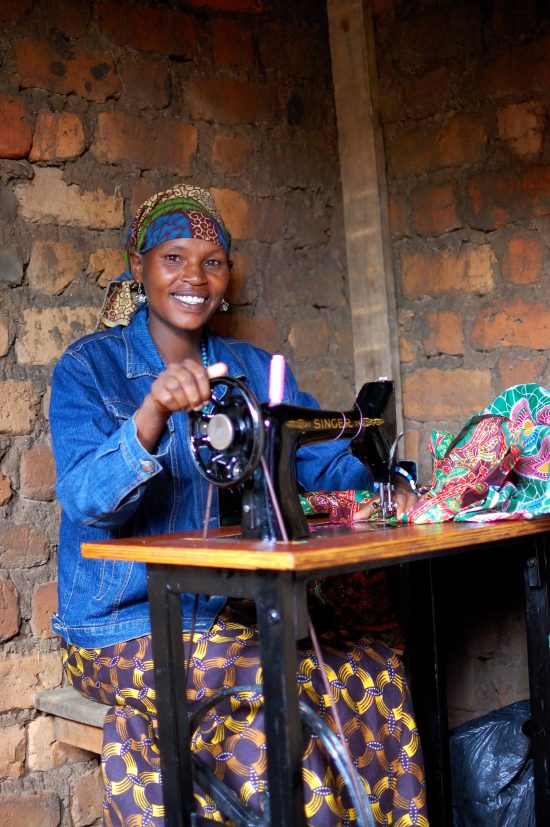