Aboorige was working as an occasional labourer and farm worker before he joined a training programme delivered in partnership with TRAX – this work was erratic, and he didn’t know from day to day if he would have any work.

He heard about the project from someone who had previously taken part in a Tools for Self Reliance / TRAX project and wanted to get involved so that he could earn a more secure living, for himself, his wife, and his two daughters, aged 4 and 10. He chose to learn electronics repair because it had always interested him, and this gave him the opportunity to learn it properly.

Aboorige does not currently have a shop but is working in the market with support of community members – a chemist shop is providing him with electricity because Aboorige is providing a service that local people had to travel 10 miles to access before. Aboorige used some of his earnings to buy his wife a sewing machine, and some of his new income is being used for her to train as a tailor. Together they are saving money, and hope to open a shop in the next year.

They are able to send their older daughter to school, and plan for her younger sister to follow shortly.

“I now feel I have a purpose to my life. Thank you very much for the life line you have given to me and my family. It has been the best gift.”
Aboorige Amiiba, Ghana

I can now buy things for myself. I no longer have to rely on others. 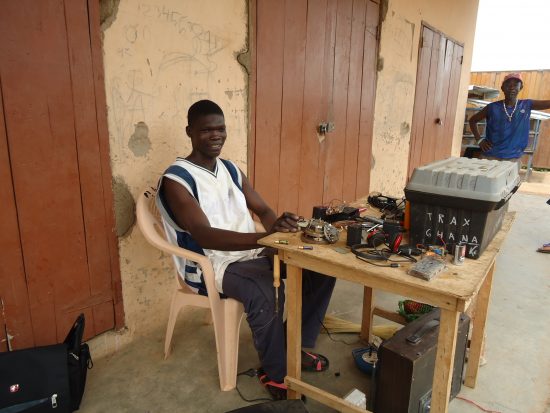